What the heck is barre, anyway? What is barre, and more importantly, is it effective?

Barre is a mash-up of ballet, Pilates and yoga. Still confused? Let’s break that down.

The ballet part can be a show-stopper, non-starter, hard no, no can do, don’t wanna do, forget tabout it, all around NO for many people. Let me try to put your mind at ease.

We just take some positions and movements from ballet, and incorporate them into our workout. We use the barre for support to get a killer leg workout. But we’re not dancing.

It’s true that you might find yourself lifting weights to the beat of the music, forgetting about the effort, and getting into the groove of the music.

Now let’s talk Pilates. Pilates was invented by Joseph Pilates. He had a background in gymnastics and bodybuilding, and had worked as a professional boxer, a circus performer, and a self-defense trainer.

During the first world war, Pilates was interned along with other German citizens living in England. It was during this time that he honed his techniques, studying yoga and the movements of animals. He refined his minimal equipment mat routine that he would later name “Contrology.” Pilates considered his methods a form of yoga. Pilates focused on the awareness of breath and the alignment of the spine, and engagement of the core and abdominal muscles.

Eventually Joseph Pilates and his wife moved to New York and began teaching his methods. Ballet dancers were attracted to Pilates early on as his regiment build flexibility, strength and endurance. You will see many traditional Pilates exercises Groove Barre exercises, as well as the awareness of breath. In fact, barre was created by a former Pilates student, who was an injured ballerina looking to rehab her body.

On to yoga. Yoga is one of the oldest disciplines, dating back to around 3000 BC. Yoga means union, the union between body and mind. Asanas, or poses, are just one element of yoga, used to help create calmness of mind. Groove Barre classes leverage asanas, using dynamic yoga postures to build flexibility, and longer static stretching to aid in recovery and cultivate calmness of the mind.

With the combination of ballet inspired muscle conditioning, Pilates, and yoga, there are endless possibilities. It’s no wonder you’ll never do the same class twice at Groove Barre. This means you’ll never get bored, and your body will constantly be faced with new challenges for the most effective workout. 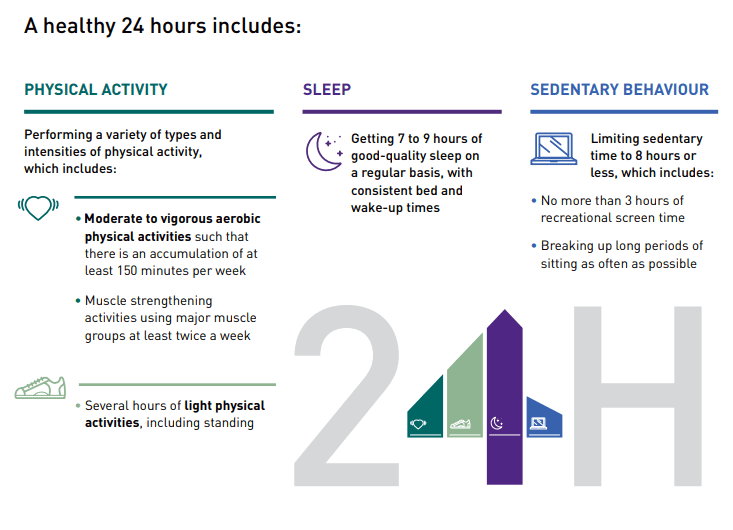 Surprised?  People are often surprised by the 150 minutes per week. And that’s at a moderate to vigorous pace. Meaning a leisurely walk isn’t going to cut it. You know what will cut it? Barre class.

In a Groove Barre barre class, we move through large, whole range of movement exercises to get the heart rate pumping, and then recover using the small range of movement associated with traditional barre classes – fatiguing the muscles to burnout. For some of the class, we will have heart rates so high we’ll be working HIIT (high intensity interval training) principals. So a Groove Barre class will definitely count towards your moderate to vigorous pace movement minutes, as well as your muscle strengthening time.

Also important to consider is: Do you like it? If you’re going to commit to 150 minutes per week, I highly recommend you find something you love. The best workout is the one you’ll do!

Another consideration is the effects of the workout on your body. I’ve spent many years as a trainer working HIITs, boot camps, step classes and power yoga. I used exercise to punish my body and burn calories in an effort to control my weight. My mantra was no pain no gain. Finding barre let me kick all of that punishing thinking to the curb. Barre makes my body feel great, has improved my strength and flexibility, and the cardio is choose your challenge.  Choose your challenge cardio means that you are in charge of your body, and you decide which option works for you, with ZERO judgement.

The last thing I want to talk about is light weights. Are they effective? Absolutely. We just need to ensure we are lifting to the point of fatigue. The burning and the shaking that barre classes are infamous for? Those are other words for fatigue…

Ready to book your first class?

Manage Cookie Consent
To provide the best experiences, we use technologies like cookies to store and/or access device information. Consenting to these technologies will allow us to process data such as browsing behavior or unique IDs on this site. Not consenting or withdrawing consent, may adversely affect certain features and functions.
Manage options Manage services Manage vendors Read more about these purposes
View preferences
{title} {title} {title}